I'm not a huge fan of autumn. Yes, the leaves look pretty but the weather turns distinctly chilly and the nights are growing longer. But cold, wet days and early dark evenings do lend themselves to reading spooky books... 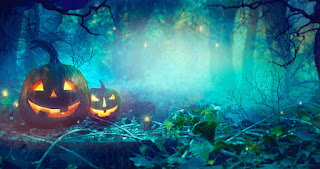 There seems to be a trend at the moment for gothic historical novels, which I LOVE, and also super-scary ghost stories. Listed below are my recommended reads for this year's Halloween. There should be something for everyone: a Victorian ghost story, witches and changelings, a couple of classics retold, and a murder mystery with an 'appearance' by the king of the undead himself...Dracula (aka: Max Mephisto, star of Elly Griffiths' Brighton Mysteries).
Happy Halloween!
The Whistling by Rebecca Netley

Elspeth Swansome goes to work as a nanny on the remote Scottish island of Skelthsea. Her charge, Mary, hasn't said a word since the unexpected death of her twin brother William, and the last nanny packed up and left in a hurry. No one will speak of what happened to William, just as no one can explain the sound of singing in empty corridors, strange dolls appearing in abandoned rooms, and the faint whistling that comes in the night...
Full review
The Lighthouse Witches by C.J. Cooke

In the 1600s, Patrick watches helplessly as those he loves are accused of witchcraft - the penalty is death; in the 1990s, Liv escapes her problems by fleeing to a remote Scottish island, Lon Haven, where the inhabitants are a superstitious lot, obsessed with witches and curses; and in the present day, Luna travels back to Lon Haven hoping to discover the truth about what happened to her family, twenty-two years previously.
Full review.
Horseman by Christina Henry

Everyone in Sleepy Hollow knows of the legendary Horseman, but no one really believes in him until fourteen year old Ben stumbles upon the headless body of a child in the woods. Could the Horseman be real after all? Or does something even more sinister stalk the woods?
Full review.
The Midnight Hour by Elly Griffiths

Brighton, 1965. When theatrical impresario Bert Billington is found poisoned, suspicion immediately falls on his much younger wife, ex-variety star Verity Malone. The evidence is stacked up against her; even her son thinks she did it. Exasperated by the police, Verity calls in two private detectives to clear her name: ex-police sergeant Emma Holmes and journalist Sam Collins. It soon becomes apparent that Bert had a very long list of enemies. In fact, it would be easier to find someone who didn't want to kill him...
Full review.
The Tailor and the Three Dead King by Dan Jones

One winter, in the reign of King Richard II (ie: the late 1300s), a tailor is riding home when he is knocked off his horse by a huge raven, which then turns into a hideous dog. The dog tells the tailor he must go to the priest and ask for absolution, or there will be terrible consequences...
Full review.
You can find more reviews on my book blog and you can also find me over on Goodreads. The books I read are a mix of those I've bought myself, or have requested from the publisher via NetGalley.
Something Wicked
Katrina Davenport has opened a coffee shop and bookstore in the notorious Raven’s Cottage, once the home of a 17th century witch known as Magik Meg. The locals have told Kat stories, of how the cottage is haunted by the witch and her demon lover, but Kat doesn’t believe in witches, or ghosts, or anything that goes bump in the dead of night. Every strange thing that happened since she moved in must have a perfectly logical explanation.Unfortunately it doesn’t really matter what Kat believes, because something wicked has returned to Raven’s Cottage.And this time it’s come for Kat. 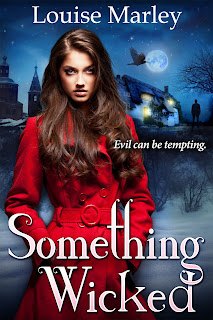