Yes, I can I cook! Are you surprised? My family don't much care for Christmas pudding or Christmas cake, but they do like mince pies! Now, most people either buy mince pies or, if they do make their own, at least buy the mincemeat. I do it the other way around! So here's my recipe for mincemeat. It makes 3lb (1.5kg) of mincemeat and takes about half an hour in total to cook.
** If you don't intend to use the mincemeat right away, you'll need to freeze it as there is not enough sugar in the recipe to preserve it! **


Method:
Peel, core and dice apples. Put them in a large casserole dish with the sherry, 5tbs of water, cinnamon and allspice. Stir, cover with lid and cook in a microwave for 5 minutes on high power (800w microwave).
Stir, add the dried fruit and sugar, and cook on high power for another 4 minutes. Stir again and cook for a further 3 to 4 minutes. The apples should be cooked and the fruit should have soaked up most of the liquid without being too soggy. Allow to cool before using.
Enjoy! 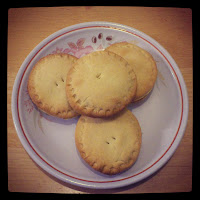 Posted by Louise Marley at 10:27 am No comments: