We previously visited Paris in December last year. Beautiful, sunny weather, but a bit chilly! So when we had an unexpected opportunity to visit again this year, we chose late September which, coincidentally, is my birthday!

Like last year, we made a list of the places we wanted to visit. I voted for the Musée du Louvre, my husband wanted to see the inside of the Notre-Dame Cathedral (we only saw the outside last time). For something quirky, we picked the Conciergerie - a former royal palace, later a prison during the French Revolution. And decided to follow that up with a walk through the Tuileries Garden, and on through into Place de la Concorde and the Champs-Élysées.

I could probably have spent all day in the Louvre. Unfortunately, we didn't have all day so we headed for the Denon Wing, mainly to get a glimpse of the Mona Lisa. And a glimpse it turned out to be, for the world's most famous painting is hidden behind bullet proof glass and a barrier to prevent anyone getting too close. So if you do want to 'see' the Mona Lisa, be aware that it will be mostly so you can say you've 'seen' it - from a distance!


We had to queue outside the glass pyramid to get through security but, once inside, the Louvre is so vast we were able to pick up a floor plan (essential!) and pay for our tickets using a machine without queuing again. We also had a very nice lunch in the mostly deserted café. The museum did become busier after lunch though.


Before it was a Renaissance palace, the Louvre was a 12th century fortress, and some of the original foundations can  still be seen in the basement.

The two things I always remember about the Notre Dame is that it can hold 9,000 people and was one of the first buildings to use flying buttresses (arched exterior supports) after cracks appeared in the walls. It's the quirky stuff that seems to stick in my mind! Also, Napoleon had his coronation here. It's free to get in, but there is a charge to go up the tower or visit the museum.

This remains my favourite bookshop (sorry, Waterstones!). I just love the maze of rooms, the atmosphere, and all the lovely books. (I've previously blogged about it here). I've bought rather too many books recently, however, so had to content myself with this pretty notebook instead.

With its turrets and spires, the Conciergerie looks very much like the royal palace it once was, but during the French Revolution it became a prison. It's most famous prisoner was Marie-Antoinette, who spent her last two months here before her execution in 1793. In 1815, her cell was transformed into an expiatory chapel in her honour, complete with altar and three paintings showing scenes from the last few weeks of her life. A number of objects that supposedly belonged to her have also been carefully preserved in glass cabinets. 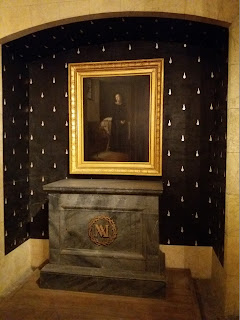 After the Conciergerie, it seemed logical to visit the Place de la Concorde - once known as the Place de la Révolution. This was where many victims of the French Revolution died on the guillotine, including King Louis XVI and his wife Marie Antoinette. It is the largest square in Paris, at one end of the Champs-Élysées.

The obelisk in the centre is known as The Luxor Obelisk, and was originally located at the entrance to Luxor Temple in Egypt (it's twin is still there!). It is 75 ft high and over 3,000 years old, and was gifted to France in 1831 by Muhammad Ali Pasha.


There are two monumental fountains in the Place de la Concorde. This one is the Fountain of River Commerce and Navigation, and was completed in 1840.

Napoleon commissioned the Arc de Triomphe in 1806 in honour of his 'great army' and his victory at the Battle of Austerlitz - but it took 30 years to finish it. At the base is the tomb of the unknown soldier, and every evening at 6.30 pm a torch is lit in memory of a French soldier who died in battle during WWI. Until we arrived, we didn't realise that it is possible to view Paris from the top of the building. Unfortunately it was growing dark and, while Paris is beautiful by night, we thought we'd wait until our next visit (hopefully!) to see this fabulous city by daylight!

When in Paris ...
The Italian Blog (or, what I did on my holidays)
Posted by Louise Marley at 10:00 am No comments: