A Walk on the Not So Wild Side: Bodnant Garden

When we first moved to Wales we lived just around the corner from the beautiful Bodnant Garden, and would visit practically every weekend. I loved it because of the extensive woodland walks, the stunning view of Snowdonia, and the beautiful rhododendrons, which reminded me of Exbury Gardens in the New Forest (Hampshire) near to where I grew up - and the inspiration for the area when my books are set. So last weekend, when the sun was out, we decided to go back and see if anything had changed.


Bodnant Garden was created when the estate was bought in 1874 by Henry Davis Pochin. At that time it consisted of Victorian shrubberies and a sloping lawn, and the house, built in 1792, was typically Georgian. Henry enlarged and altered the house, and created what was to become the famous laburnum arch.

But it was his grandson, Henry McLaren (the second Lord Aberconway), who would go on to develop the garden over the next fifty years, including designing the series of Italian style terraces overlooking the mountains.

Below is a photo of the Lily Terrace, named for the water lilies which bloom from June to September. It was designed around two existing cedar trees, which had been planted in 1875. 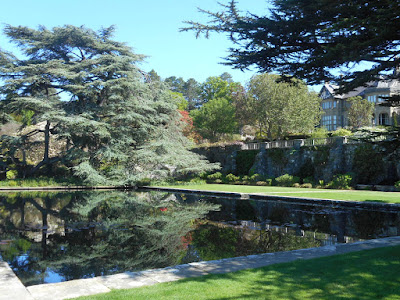 Below the Lily Terrace is the Canal Terrace, with an open air stage at one end and The Pin Mill at the other.


The Pin Mill was originally built as a garden house in about 1730 at Woodchester in Gloucestershire. Later it was used as a factory for making pins and then as a tannery. By 1938 it was in a very dilapidated state. Lord Aberconwy bought it and had it transferred to Bodnant.

From the Canal Terrace we took the path descending through the Rockery to the River Hiraethlyn, which is bordered on each side by the Dell. The conifers here are massive (over 100 feet) and were planted in 1876.


Since our previous visit, the garden has now been extended beyond the waterfall and Mill Pond to include Far End and the Skater's Pond, with this cute little island in the middle. (That's going in a book!)

Finally, on the way back up the hill towards the house, we passed 'The Poem', overlooking the Dell and built by Henry Pochin as the family mausoleum.


Never miss a post! See that little box in the left-hand column, near the top, that says 'Follow by Email'? If you add your email address, you'll receive my latest blog post almost as soon as I've written it.
Posted by Louise Marley at 9:06 am