New Book: Trust Me I Lie

In which I talk about the inspiration behind my latest novel.

Writing a book is like baking a cake. There is not just the one idea (ingredient) but several, all coming together to create the story. I had the original idea many years ago, while chatting to the crime writer Jessie Keane about the plot of her book The Make, in which the main character's brother ends up in a coma. And for some reason (I have no idea why - that's just how my brain works!) I thought of the classic fairy tale, Sleeping Beauty.

I've always loved fairy stories, particularly those with a darker edge, although I still prefer them to have a traditional happy ending! I blame my grandparents, who bought me two huge books of fairy stories when I was about six years old. Although I still own them, they are in a crate in storage so I can't show you a photo but oh, I did love them! I also owned the Ladybird versions, particularly Cinderella, which I loved because she got to go to the ball three times, in a succession of spectacular dresses. Yes, I know, I'm shallow: what can I say?

So, Sleeping Beauty + ballgown obsession = girl being found dead 'as though sleeping' in vintage Dior. This, for writers, is also known as the light-bulb moment!

The next ingredient (the location) popped into my head during one of my walks through the Welsh countryside near my home, where I stumbled upon a ruined mansion called Baron Hill, which looked as though it had come straight out of Sleeping Beauty. Although built in 1618 by Sir Richard Bulkeley, it was rebuilt in the late 1700s in a Neo-Palladian style. It was damaged by fire around the time of WW2 and has been left to become derelict. It is a very sad-looking place and, although there has been talk of restoring it, I feel it is far too gone to save it.

Although I've 'borrowed' part of the history of Baron Hill - built in the 1600s, and destroyed by fire - Baron Hill has been abandoned for far longer than the house in my novel.

When I started writing Trust Me I Lie I decided I was going to call it Something Wicked, but the more I wrote, the more I realised the title didn't fit. I'd also had the idea for a historical backstory, similar to my novel Breathless, but I soon realised that didn't work either. So I split the story into two books: the first one became my novella Something Wicked, the second became Trust Me I Lie. If you're a writer, I don't recommend doing this - I recommend properly planning your novel in the first place! (See my post, How I Write). But I've learned from this, and hopefully won't make the same mistake again. (Knowing me, I'll just make a whole load of new ones ... )

And the last ingredient? I moved to a village just outside Llandudno, where I came across these curious statues dotted around the town. Known as the Alice in Wonderland Trail, they reference the fact that Lewis Carroll's inspiration for Alice (Alice Liddell) once lived in the town. (And I've blogged about that here). 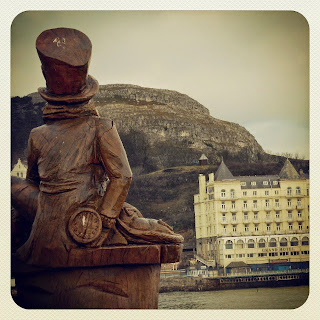 Any other completely random facts? Well, the scene where my heroine, Milla, finds two strange men trashing her sitting room is based on a nightmare I once had! And anyone who's read Nemesis might recognise Milla's apartment - it's the same one Alicia lived in before her marriage. And finally, if you want to see more photos of Baron Hill and the things which inspired me, be sure to check out my Pinterest board!

I hope you enjoy the book!

Trust Me I Lie

When Milla Graham arrives in the picture-perfect village of Buckley she tells everyone she’s investigating the murder of her mother, who died eighteen years ago. But there’s already one Milla Graham buried in the churchyard and another about to be found dead in the derelict family mansion.

Detective Inspector Ben Taylor has no life outside the police force. Even his own colleagues think he’s a boring stick-in-the-mud. But now he’s met Milla and his safe, comfortable life has been turned upside down. She’s crashed his car, emptied his wallet and is about to get him fired.

He knows she’s a liar because she cheerfully told him so.

Unless she’s lying about that too …

Alice's Adventures in ... Llandudno
How I Write
Ten Authors Who Influenced Me (or, you are what you read)

Posted by Louise Marley at 7:35 am