Ten Authors Who Influenced Me (or, You Are What You Read)

A year ago I wrote about five books that influenced me as a writer. So for this week's post I thought I'd expand on that and talk about the authors who influenced my writing style...

What makes a writer? A huge imagination, obviously, combined with life's experiences and the burning need to write, even with the knowledge that what you write might never be read by anyone other than yourself - or your mum/spouse/bestie. (OK, that sounds really sad, but it's A Writer's Thing. We're used to it, we're over it, and we still don't let it stop us doing it.)

Something else I believe makes a writer are the books we choose to read. I've never understood writers who say they don't read - anything. As a writer you can learn so much from reading other people's books, absorbing how to create plots and characters without even realising you're doing it. Stephen King said it best in his book, On Writing:

So, apart from Stephen King, which authors influenced me?

For as long as I can remember, I've loved to read. I was lucky, I came from a family of book addicts. I inherited my mother's Enid Blyton collection and a hefty Hans Christian Andersen omnibus from my father. I still own a copy of Enid Blyton's fairy tales, published in the 1930s and now falling to bits, for it was well-loved both by me and my mother. In contrast the Hans Christian Andersen book, while almost as old, is immaculate, possibly because many of the stories weren't exactly happy ever after. 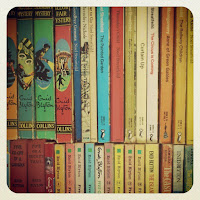 From fairy tales I moved onto adventure stories; Enid Blyton's Famous Five and her Barney Mystery stories were my favourites. (The Ring O'Bells Mystery even made an appearance in Nemesis). In those days Enid Blyton was considered very unfashionable and I had to build my collection from second-hand stores and jumble sales.

Around the age of ten I had a short-lived obsession with wanting to be a ballerina/movie star/rock singer, and discovered Noel Streatfeild. I particularly loved Ballet Shoes and the sequels Curtain Up (also known as Theatre Shoes) and The Painted Garden (Movie Shoes). Thursday's Child also made a huge impression. The heroine is strong and not always likeable, it's set in the past and there is a mystery to solve. Without realising it, I'd found the type of book I love to read most. 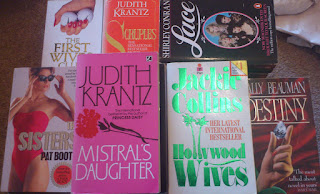 When I hit my teens the fashion was for angsty teenage books, so I went straight onto fiction for adults. First I worked my way through my grandmother's collection of romantic suspense. Then, while on a rainy holiday to the Isle of Wight, I discovered Jilly Cooper, before moving on to those big fat glitzy books by Jackie Collins, Sally Beauman and Judith Krantz. It certainly was a big jump from Enid Blyton and Noel Streatfeild but oh, I loved those books! They were so glamorous; always set in exotic locations with sexy characters (male and female), high stakes and a mystery involving someone's parentage or murder attempts by a jealous rival. Reading those books definitely influenced the first novel I wrote, A Girl's Best Friend (which I've blogged about here).

By the tail end of the 1990s the fashion for books about strong, independent women waned and I found myself reading less romance and more crime/thrillers. I discovered Harlan Coben, loving his twisty plots that usually had some family secret at the heart, and also Kathy Reichs for her strong heroine and clever forensic clues that I always failed to spot. (I hate guessing the bad guy two chapters in!)

At the end of the 2000s I was given my first Kindle, which opened up a whole new world to me. Suddenly I had instant access to thousands of authors I'd never heard of - along with genres I'd never heard of either. I never really got to grips with steampunk or stories about shape-shifters,  but I rediscovered my love of romantic suspense - something I'd first discovered when I'd raided my grandmother's bookshelves way  back in my teens - and historical romance, which influenced Breathless and Something Wicked. My reading habits had turned full circle.

So the books I love to read (even though they're from vastly different genres) have all contributed to the kind of stories I like to write. I adore strong female characters who are either part of a loving family or a close group of friends. One character might be wealthy or a celebrity, because their 'problems' fascinate me. I like beautiful locations, particularly big old houses that have some kind of history or dubious past. And I love twisty-turny plots and mysteries.

If I'd read different books, would I be a different writer? Undoubtedly.

Maybe you should be careful what you read ...