If you follow me on Twitter you might have noticed that I've been raving about a book called Away with the Penguins by Hazel Prior. It's a fabulous, feel-good book, about an elderly lady who decides to leave all her money to a penguin research facility in Antarctica - on condition they allow her to visit first! Today I am thrilled to welcome Hazel to my blog to explain exactly what it is about penguins that made her want to write about them!

Why penguins? This is a question I’ve been asked a lot recently. You don’t get many novels that feature a colony of penguins, and when I first thought of bringing them together with a curmudgeonly eighty-five-year old heroine, I did wonder if I could pull it off. However, I’m a strong believer in writing about what you love—how can you possibly sustain the intense, long-term commitment that you put into a novel otherwise? And the idea just tickled my fancy.
I’d already written my first book ELLIE AND THE HARP MAKER, around my favourite things: Celtic harps, kind and eccentric characters and Exmoor countryside. I was lucky to get a two-book deal with the publishers Penguin Random House, and was so excited and proud that I was namedropping ‘Penguin’ at every opportunity. So when it came to the decision about what book 2 would be about, that little quirky bird hopped into my head.
The more I thought about it, the more I liked it. I could set the novel in Antarctica—what an opportunity to take my readers to such a wild and magical place! I couldn’t afford to go there myself but I knew I’d enjoy researching it and conjuring up the details in my imagination. What’s more I knew someone who could help…
I happen to have a close friend who is crazy about penguins and she has an inspirational story of her own. Several years ago her husband died very suddenly but she found an unusual strategy for dealing with her grief: She decided to travel around the world and take photos of every species of penguin in its natural habitat. She has now amassed fabulous photos of seventeen species of penguin. Only one more to go! She’s gained enormous joy and solace from her penguin trips, and this made me think about nature as a healer.
One of my own strategies for dealing with grief, illness or hardship is to turn to books and I know that many people do the same. For this reason I always want my writing to be uplifting in some way, so I show characters who face challenges but manage to overcome them. 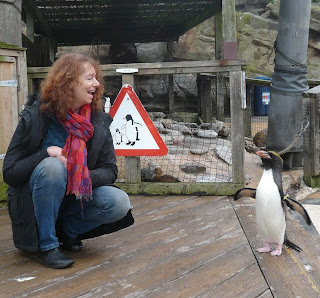 As I started to research penguins, I realised that I had chosen exactly the right creature for this purpose. Penguins set us a wonderful example. They live in the harshest conditions on the planet and yet face their daily challenges with incredible cheerfulness, determination and gusto. They’re sociable birds, too. As my plot developed I realised they could teach my heroine, Veronica McCreedy, a lesson. Veronica is disillusioned with the human race because of the way she’s been treated in the past, but the penguins show her the importance of community and mutual support.
My job as a writer is to tell a good story and entertain people, not to preach. But I do like to deal with serious issues, wrap them up in a bit of fun and maybe provoke a thought or two. Scientists study the fluctuations in penguin colonies because they indicate key environmental changes, so in writing this book I’ve touched on some of the devastating effects of climate change. The environmental crisis has loomed large in the public psyche recently but this isn’t just me jumping onto a bandwagon; I wrote my novel’s first draft before anyone had even heard of Greta Thunberg. The publication of AWAY WITH THE PENGUINS is timely, though, and I’m glad that my quirky Antarctic story adds another small voice to the clamour for change.
How did I research penguins? As well as quizzing my penguin-obsessed friend and poring over her photographs, I spent many happy hours watching penguin footage on YouTube. I read books about penguins from cover to cover. There are blogs on the British Antarctic Survey website written by scientists who study penguins in the Antarctic South Shetlands, so that was incredibly useful. I went to visit some real penguins, too, at Living Coasts, a sea-life centre in Torquay. The staff there generously shared all sorts of penguin facts and figures. 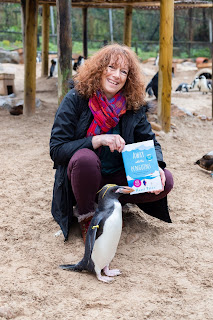 I was thrilled to meet Yoyo, a very friendly penguin who was hand-reared. When the book came out in hardback I went back to show him.
He liked it so much he wanted to eat it! 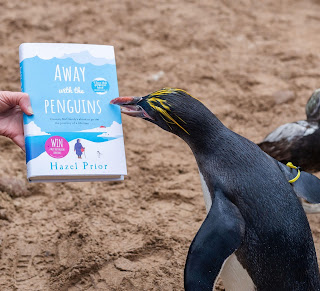 Sadly, this year Living Coasts had to be closed due to the pandemic, but Yoyo and his friends have apparently settled well in their new home in Wales.
Like most people, I find penguins charming and funny. It’s almost impossible to look at a penguin without smiling. For this reason, and to celebrate the book’s recent Richard & Judy Book Club success, I ran a penguin drawing competition on Twitter. Do check it out here if you’d like some light relief from this very difficult year. https://www.hazeltheharpist.co.uk/penguins
Finally, a BIG THANK YOU for having me, Louise! And I think it’s appropriate to end with this quote from John Ruskin, which I’ve used at the beginning of my book: "I find penguins at present the only comfort in life… One can’t be angry when one looks at a penguin..."
Away With The Penguins

Veronica McCreedy is about to have the journey of a lifetime...

Veronica McCreedy lives in a mansion by the sea. She loves a nice cup of Darjeeling tea whilst watching a good wildlife documentary. And she’s never seen without her ruby-red lipstick.

Although these days Veronica is rarely seen by anyone because, at 85, her days are spent mostly at home, alone.

She can be found either collecting litter from the beach (‘people who litter the countryside should be shot’), trying to locate her glasses (‘someone must have moved them’) or shouting instructions to her assistant, Eileen (‘Eileen, door!’).

Veronica doesn’t have family or friends nearby. Not that she knows about, anyway... And she has no idea where she’s going to leave her considerable wealth when she dies.

But today... today Veronica is going to make a decision that will change all of this.

Amazon USA
(published as How the Penguins Saved Veronica)
About Hazel

Hazel Prior was born in Oxford but has lived in many places including the Welsh borders, Scotland, south-west England and Italy. Her jobs have included harp-playing, teaching English as a foreign language and acting. She has won nine prizes in national writing competitions and has had a number of short stories published in literary magazines. Currently working as a freelance harpist, Hazel lives on Exmoor with her husband and a huge ginger cat.
Website
Twitter  @HazelPriorBooks
Instagram
Posted by Louise Marley at 4:44 pm 2 comments: