As some of you may already know, I moved house about three months ago, closer to the English border and the cities of Chester and Liverpool. This has opened up a whole new world of stately homes and castles that were always too far for me to visit before!

Top of my 'wish' list was Speke Hall, just outside Liverpool and run by the National Trust. I've wanted to visit this house for a long time because of the beautiful Tudor facade. Although, as it turns out, appearances can be deceptive!


My favourite room was the Oak Drawing Room. The ornate plaster ceiling dates from the 17th century, and shows flowers and grapevines - and the occasional snake! The carved panelling above the fireplace dates from around 1560 and shows Sir William Norris surrounded by his two wives and nineteen children! But by the 18th century the house had fallen into disrepair, the floor had been used as firewood and ivy was coming in through the walls and windows.

The Norris family owned a house on this site since the early 14th century but the building of Speke Hall began in around 1530 for Sir William Norris. The family survived persecution as Catholics, and were on the losing side during the Civil War,  but still managed to hold onto their estate until it was sold in 1795 to Richard Watt, who had made his money from sugar plantations in Jamaica.


But the most fascinating character for me was the last person to own Speke Hall, Adelaide Watt, who inherited the estate at the age of eight, following the deaths of her parents. Brought up by her Great-Uncle in Scotland, he taught her all about estate management and when she came of age, she took over the estate and turned it into a profitable business. She sounds like an amazing lady!

A Visit to Llanrwst (or, the Missing Prince and the Empty Coffin)

Llanrwst is an old market town close to where I live. I've often driven through it, mainly on my way to somewhere else, and although Gwydir Castle and Tu Hwnt I'r Bont are two of my favourite places, I've never really stopped to explore. So last weekend, when the 'kids' were home for the holidays, we decided to stop for a longer visit.

The view of Llanrwst everyone always recognises is the famous Pont Fawr bridge and the tearooms beside it. The photo above was taken on Saturday and it was pouring with rain, as you can probably tell. Here's one I took a couple of years back, which might make it a little more recognisable!

Fortified against the weather by coffee and scones, we walked around the town and ended up in Church Street beside the Almshouses. These were built in 1610 by Sir John Wynn of Gwydir Castle, originally to 'shelter twelve poor men', but by the 18th century women were allowed to live here too. The last resident moved out in the 1970s and the buildings became derelict until being restored in 2000.

From the Almshouses we passed beneath an archway into the the graveyard of St Grwst Church, which is right beside the River Conwy. St Grwst was a holy man who lived in the area in the 6th century.  The church was built in the late 1400s but burned down during the Wars of the Roses (in revenge for Denbigh Castle being set on fire), before being rebuilt. The Gwydir Chapel was added onto the side by Richard Wynn of Gwydir Castle - see the crenellated roof. Like the bridge, it is also thought to have been designed by Inigo Jones.

Inside the church, the nave and chancel are divided by a medieval rood screen, complete with musician's loft, which is almost as old as the church. This was taken from Maenan Abbey after the dissolution of the monasteries. Apologies for the poor quality photo - my camera isn't great and it was a bit dark. You'll have to take my word that it was amazing!

One of the reasons I was so keen to visit this church was that the Gwydir Chapel contains a stone sarcophagus that supposedly once held the body of Llywelyn the Great (Llywelyn ap Iorwerth, Prince of Gwynedd). Llywelyn had originally  been buried at Aberconwy Abbey in 1240, but when King Edward I built Conwy Castle the Abbey was forced to move to Maenan in the Conwy Valley. The legend says that the monks took Llywelyn's remains with them to the new abbey. After the dissolution of the monasteries in 1536, the now empty sarcophagus ended up in the possession of the Wynn family before being moved to the Gwydir Chapel.

Beside the sarcophagus is a stone effigy of a knight. This is thought to be Howell ap Coetmor, who died in 1538. He was a commander of longbowmen under Edward, the Black Prince, at the Battle of Poitiers. He was the first recorded owner of the nearby Gwydir Castle, later sold to the Wynn family, who also have many monuments on the walls of the chapel.

Posted by Louise Marley at 11:58 pm No comments:

How to Declutter your Books (without getting the urge to run for the hills...)

It started when I spotted Mary Stewart's classic romantic suspense novels had been reduced to 99p in the Kindle Daily Deal. I promptly downloaded them all. Then it was Elly Griffiths's murder mysteries, then Georgette Heyer's historical romances. All my favourite authors, all books I already owned but was too lazy to unearth them from whatever crate in the garage I'd stored them in. It took a while but I eventually realised that if I kept doing this it was going to get really expensive. Had I finally reached the point where I would have to choose between ebooks and 'real' books?


No, no, no, no, no; that would be far too drastic! Throw away my favourite books, my vintage collections, and all those books I'd bought and not yet read? I just couldn't do it.

Perhaps instead of shoving books into crates, I could reduce their number and bring my favourites back into the house and onto my bookshelves?

1. I kept all my favourites, obviously - mostly romance and crime, including my Agatha Christies with their amazing vintage covers. Some look even scarier than the stories.

2. Anything falling to bits went into the recycling bin. It was a wrench - but also a good excuse to buy again on Kindle! Although I'm already on my second copy of several Jilly Cooper books; they have literally been read to death, poor things.

3. I weeded out duplicates. I have a bad habit of accidentally purchasing books I already own but I do like to buy favourites again when they're on offer. Amazon will tell me if I've already bought a book from them but not if I've bought it from Waterstones. I can't think why.

4. I took out anything I was never likely to read, or read again because I hadn't enjoyed it or my tastes had changed. Goodbye contemporary romance and 80s bonkbusters. I also had a collection of vintage Mills and Boon (even older than me!), with some very dubious consent scenes between hero and heroine. I'm afraid they had to go, along with the erotica I bought after the success of Fifty Shades and thought 'Hey, that looks easy to write. Maybe I'll have a go?' (Note to self: Don't ever chase a trend that is so far out of your comfort zone!)

5. The books I had left (not quite half, more like two thirds) I sorted into genres and stacked them back into the crates, now labelled with the authors' names so I can find them again.

6. Everything I hadn't read but still wanted to read I sorted into smaller crates, creating possibly the biggest to-be-read pile ever. Or, as my daughter said, 'That's not a to-be-read pile, that's a small library!' I'm keeping them in my study, to shame me into reading them! I did toy with the idea of adding them all to my 'want to read' list on Goodreads - but I think it would be quicker to get on and read them!

So that's my book collection streamlined and waiting for me to buy another bookcase. Now all I have to do is start reading!

And in the meantime, make sure I stay out of the bookshop, the library, Netgalley ...

Ten Authors Who Influenced Me (or, you are what you read!)
Ten (Slightly Random) Ways to Choose a Book
Why I Love My Kindle

And if you want to know more about the books I love reading,
visit my book blog!

Once More Unto The Bookstore 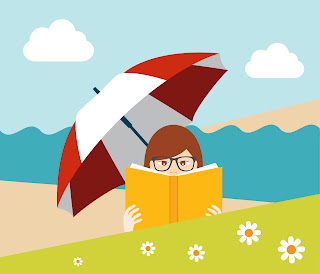 Image Copyright: Mine, except top and bottom: Shutterstock
Posted by Louise Marley at 8:11 pm 2 comments: