Walking the Walls of Conwy

One drawback to being self-employed is that, if you're not careful, a Saturday or Sunday can be pretty much the same as a Monday or a Tuesday, or any other day of the week. So last weekend I took a break and walked the walls around Conwy.

The walls were built for King Edward I at the same time as Conwy Castle. They took four years to complete and were finished in 1287. They're are about 1.3 km long and can be walked almost in their entirety, although you have to be fairly fit and not mind heights!

There are twenty-one towers, placed at regular intervals, as well as three twin-towered gateways. It is not possible to walk on top of the walls for a complete circuit. Think of the route as a giant U, with the top part being the quayside. The route is also in two sections, the other break being by the railway station. At these points you can follow the route at ground-level - which is not quite as hair-raising! The highest point, the Watchtower, is about fifty foot from the ground, with only a single railing between you and a painful encounter with the pavement. So if you are planning on walking the walls, I would recommend sensible shoes, dry weather and a very firm grip!

The purpose of the walls was to protect the town, mainly from the Welsh - only the English invaders lived on the inside! In theory, the walls were so strong they could not be breached and anyone managing to scale the walls would immediately be isolated on that section - the only route across each tower was by easily removed wooden planking. However, in one section three narrow windows have been set into the wall, to allow light into a collection of buildings once known as Llywelyn's Hall, which pre-dates both the castle and the wall.

The hall took its name from Llywelyn ap Gruffydd, Prince of Wales, who may have held court here. It's not known whether the walls were built against the hall, or if it was knocked down and rebuilt.  In 1315 the hall, which was built of timber, was dismantled and moved to Caernarfon Castle, where it was used as a storeroom - and still referred to as Llywelyn's Hall!

The Mill Gate was where the King's Wardrobe was located. Contrary to what the name suggests, the wardrobe was the department through which war and works were administered. These curious protuberances are actually communal toilets! The King had them built for his Wardrobe staff at a cost of £15 - about £45,000 in today's money.


In 1827 a new coastal road was built and a new gateway created  through one of the towers, and in 1847 an entire section of the wall was demolished to make way for a railway line, although it was then rebuilt with a huge archway and imitation battlements.

A tunnel for the same railway passes almost directly beneath one of the towers on the opposite side of the town. When it was built it caused partial subsidence and a large crack to appear in the masonry. 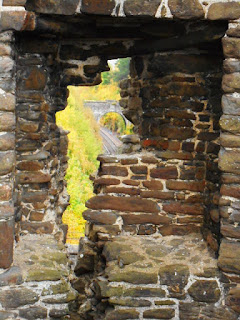 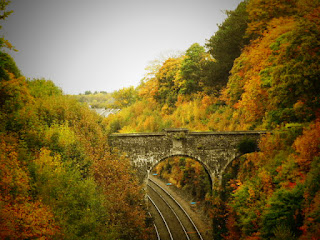 Beside the quayside, the wall extends into the river in a kind of spur. It was probably originally designed as a breakwater. There was once a tower at the very end, although it disappeared into the river centuries ago.


It is free to walk Conwy Walls, although Conwy Castle, under the care of Cadw, is also well worth a visit. There are also plenty of coffee shops in Conwy, although after all that walking you may need more than a slice of cake!


Never miss a post! See that little box in the left-hand column, near the top, that says 'Follow by Email'? If you add your email address, you'll receive my latest blog post almost as soon as I've written it.

A Grave Obsession (about  St Mary's and All Saints Church, Conwy)