A Walk on the Wild* Side & The Lonely Knight

In which I actually leave the house ...

One of my New Year's Resolutions was to stop working weekends and explore the surrounding countryside instead. I live in North Wales; it's one of the most beautiful places in the world; do I even need an excuse?


One of my favourite walks is along the River Llugwy in Betws-y-Coed. It's not too strenuous and there are plenty of coffee shops in the village. Betws-y-Coed Community Council have built a wooden walkway between the trees, suitable for wheelchairs and prams, as well as for when the route becomes too muddy underfoot. (You can tell I'm a townie). It's a very short walk (yup, townie), lasting about half an hour, but the scenery is beautiful. It is also possible to carry on walking alongside the river to the Miners' Bridge.

Here's a photo of the River Llugwy, taken from the walkway. I'm fascinated by the effect of light on water, and I'm always trying to photograph it - not terribly successfully. 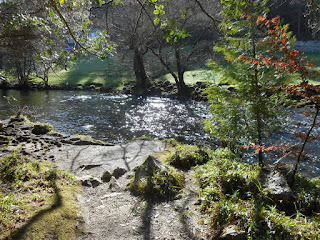 Once you've walked past the walkway, some of the path is made up with these slabs of stone: 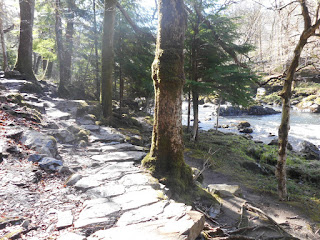 I loved these moss-covered boulders and had several tries at photographing them: 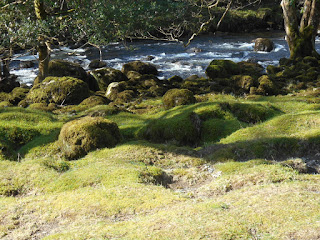 The River Llugwy, taken from the Miners' Bridge: 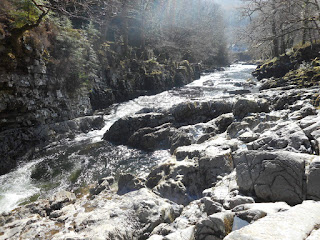 As the name suggests, the bridge was used by the miners on their way to work in the Gwydyr Forest. It is unusual in that it is built at a steep incline.

I think my favourite bridge is the Sappers' Bridge, on the other side of the village. It's a suspension footbridge and was built by the Royal Engineers in 1930 to replace an earlier bridge which had been swept away. It crosses the River Conwy beside St Michael's Old Church - and is disconcertingly bouncy to walk on.


The name Betws-y-Coed means 'prayer house in the woods' and is thought to refer to St Michael's Old Church, which was built in the 14th century and is the oldest building in the village.


Although the church was made redundant in 1873, with the building of St Mary's Church on the main road, it is still consecrated and holds a service on St Michael's Day (29th September) and a candlelit service at Christmas.


The church has been beautifully restored and is definitely worth a visit. The font dates from the 13th century (older than the church), and the Tudor linen fold panelling of the oak pulpit is believed to have come from Gwydir Castle at Llanrwst. But what caught my attention was the stone effigy of a knight - the kind more usually seen on top of a chest tomb. The Latin inscription says: 'Here lies Gruffydd son of Dafydd the Red: Lamb of God have mercy upon me'. So who was Gruffydd, and why is he lying here all on his own?


Helpfully, there's a poster on the wall above him explaining his story. It says that he lived locally at Fedw Deg, that he fought under the Black Prince (son of Edward III) at the Battle of Poitiers in 1356 and that he died sometime around 1370-80. 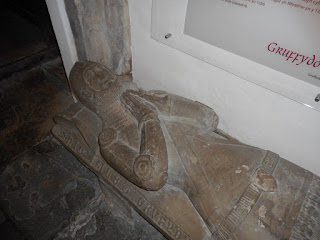 Because he's all on his own, I had imagined him to be a single man but apparently he was married to a lady named Margaret. His effigy shows him wearing the armour of a knight and he is armed with a sword and dagger. His feet rest on a lion, meaning he died in battle, and his coat of arms was a chevron with two oak leaves - the design is shown both on his belt buckle and his tunic. His head rests on a helmet topped with a bird holding an oak leaf in its beak. Unfortunately at some time in the past Gruffydd's helmet has been trimmed to fit the niche where it now rests. 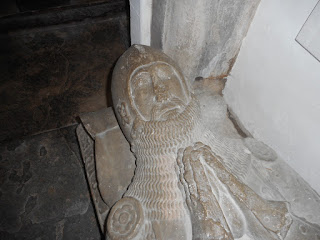 There is a theory that he was descended from the princes of Gwynedd. His father was thought to be the illegitimate son of Dafydd, Lord of Denbigh, who was the brother of Llywelyn ap Gruffydd (Llywelyn the Last), but no one can be sure.

How did his effigy end up in this tiny church? Well, the clue is in the date of his death. Given how important he was locally, and that the church was rebuilt at the same time, it is not unreasonable to conclude he was the original patron.

So, not such a lonely knight after all.

The Alpine Coffee Shop and Gallery

Never miss a post! See that little box in the left-hand column, near the top, that says 'Follow by Email'? If you add your email address, you'll receive my latest blog post almost as soon as I've written it.
Posted by Louise Marley at 8:55 pm