Christmas for the Marley family starts the night before, when we choose a favourite Christmas movie to watch, usually Elf. When the children were younger, I would read them ‘Twas the Night Before Christmas, and then we’d look out the window to try and see the lights on Father Christmas’s sleigh. We would leave a mince pie out for Father Christmas, and a carrot for his reindeer, and have no trouble persuading the children to go to bed early. Unfortunately they would wake up early too, eager to see what Father Christmas had brought, but now they’re teenagers we get to wake them. I think this is known as ‘payback’.

Because my husband is convinced we’ll be burgled if we leave the presents beneath the tree, he doesn’t put them out until everyone has gone to bed the night before. This means when we come downstairs on Christmas morning, the tree lights are on and it all looks very magical. This is a minor Christmas miracle in itself as fairy lights hate me and I have to buy new ones every year. As we all believe in Father Christmas, including the teenagers (they’re not daft!), we all have Christmas stockings, but we open our main presents after breakfast. While everyone plays with their new ‘toys’, I cook Christmas dinner – accompanied by loud, cheesy Christmas music and a glass of champagne.

We have a traditional Christmas dinner, which we always eat at lunchtime – I have no idea why! Afterwards, we force the teenagers to play an old-fashioned board game, usually The Simpson’s version of Cluedo or Scrabble, and then, if they’ve been really good, we allow them to beat us on their new video games.

Of course, Christmas doesn’t always go according to plan. Actually, it hardly ever goes according to plan, but the most disastrous one was when we were snowed in. I’d ordered all the presents online as well as the Christmas groceries to be delivered – and nothing arrived! It was Christmas Eve before the roads had cleared enough for us to inch our way to the nearest supermarket, fill a trolley and skid back home.

Strangely enough, that Christmas turned out to be our best one ever. Instead of a ‘traditional’ Christmas, we built snowmen and went sledging – and I made a start on writing a snow-themed story that turned into Something Wicked... 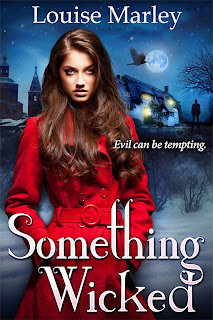 How Grandma Invented my Family's Christmas

Posted by Louise Marley at 4:14 pm