I first had the idea for You Make It Feel Like Christmas way back in 2014 while I was at the cinema watching Guardians of the Galaxy. You can't see the connection between a superhero movie and a Christmas romantic comedy? Well, the soundtrack featured an old 70s song called Hooked on a Feeling and the lyrics got me thinking about people who have (for one reason or another) become stuck on a certain way of thinking.

I often have ideas for stories that I scribble down in a notebook and then promptly forget about but this one stayed in my mind. A few years later, when the mystery novel I was working on wasn't coming together in the way I wanted (I'll be blogging about that later), I decided to start something completely different. I remembered those characters who'd become 'hooked on a feeling' and You Make It Feel Like Christmas began to take shape.

Beth is obsessed with the idea of having a perfect family Christmas and still has feelings for the man that broke her heart seven years ago. Aidan associates Christmas spent at his family home with a tragic period in his life and would happily see the house flattened, whereas his brother Nick remembers his idyllic childhood and will do anything to save it.

I didn't realise until I'd finished writing the book that my feelings about the house I'd grown up in had also found their way into the story. This might have been because part of the book was written there while I was visiting my mother. We talked a lot about the 'old days' and the amount of work it had taken to restore the house. 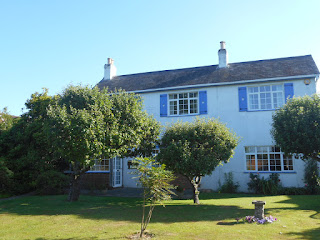 My childhood home
My parents bought their house back in the 1970s. It was their dream house and restoring it became their hobby - except they didn't restore it in a traditional way! Instead, they trawled reclamation sites buying quirky fittings from old houses that had been demolished. Although the house was Victorian they added oak beams to the sitting room ceiling (original 300-year-old ship's timbers!) along with a huge Tudor fireplace.
I asked my mother why they'd chosen to do this and she explained that they had loved visiting old houses, with all their history, and wanted to recreate a little bit of that in their own home.
The appearance of the Abbey in my story was influenced by much bigger real-life houses, including Lyndhurst Mansion in Tarrytown, New York (also the location for the 1970s horror film House of Dark Shadows) and Newstead Abbey in Nottinghamshire (once home to Lord Byron - who also gets a mention!). 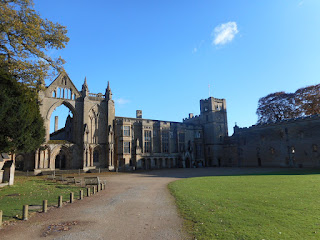 When I wrote the book, I'd recently moved into one of the first houses on a new estate and for the next year I effectively lived on a building site. This probably influenced my decision to make Aidan a builder!

Like Agatha in You Make It Feel Like Christmas, my grandmother was heavily into crafting. I remember her making me jewellery out of rose hips, and jack-'o-lanterns out of turnips - they were super-scary! - and Christmas decorations out of real holly, ivy and fir cones, which she'd sprinkle with glitter or spray gold (this was the 80s!). My grandmother also told me the stories behind the traditions of decorating our houses with greenery, and the legend of Balder and Loki. 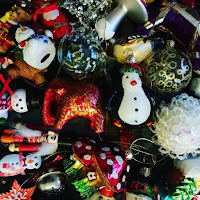 In You Make It Feel Like Christmas the Holly family have an heirloom box of decorations going back to the 1960s - so did my mother. Earlier in the story, when Nick decorates his tree with some very unusual baubles, he explains to Beth how much they mean to him. This is something that is also important to me. I've collected the decorations for my own tree over many years and every one has a story behind it.

Lucy's experience of driving through a snowstorm happened to me! Hearing the sound of compacted ice scrape the underside of my car is not one I'd care to repeat!

Ophelia's fabulous high fruit, low sugar mince pies are based on my own recipe.

And the Holly family's usual Christmas - dinner at lunchtime, an afternoon spent watching the Christmas movie on TV, eating leftovers and Quality Street, and playing Death-by-Scrabble?

I wonder where I got that idea from?