Where I (Used to!) Write

I've moved house a lot over the years (I think I'm on my 12th house), so the 'where I work' posts on this blog have described several different rooms and views. There was the study that overlooked Snowdonia, the one that looked out over Penrhyn Castle, and then there was the last house, where my study had a lovely view of the bus stop!
In these posts I usually mention the story of how I wrote my first book in a tiny bungalow, with my monitor jammed into a cupboard and my keyboard on my lap.
And then last week I found this photo. Yes, that's me as a teenager, chuffed to bits to have my own desk and my own typewriter, and being A Writer. 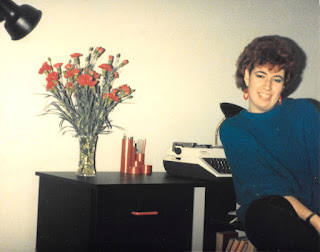 I grew up in a rambling Victorian house that, even shared with my large family, had a room no one else wanted to use. When my parents moved in they decided it would make a great playroom, to keep the kids out of the way of the grown-ups. But my brothers and I convinced ourselves the room was haunted by the little old lady who'd lived in the house ten years before us. We knew she'd used the room as a bedroom, as she'd been too frail to climb the stairs. So we decided her ghost was the reason the door would open by itself (this often happens in old houses) and we even thought we heard a piano playing in the empty room - it was probably a radio! We ignored the cold spooky 'playroom' and played in the garden instead!
Skip forward fifteen years when we'd all grown up, my mother suggested I could have the room for myself. It would be a fabulous place for me and my friends to hang out away from the adults (I'm noticing a theme here), but I was thrilled. Especially when,
Mum: You can decorate it however you like!
Me: I'm going to paint the walls black!
Mum: Absolutely not!
We compromised with grey walls but with my first pay cheque I bought a desk, two bookcases, and a small sofa, all in my favourite black. I probably imagined lying on the sofa and dictating my novel to a secretary, like Barbara Cartland, because that's what writers do, right? Thirty-five years later (thirty-five!!!), I still have the two black bookcases but sadly the desk was taken to the dump just before Christmas. Although it did have a second life as my daughter's desk for a good twenty years.
I'd completely forgotten this photo had been taken until I found it last week. As my husband said when I showed it to him (after he'd got over laughing at the 80s fashion), what advice would I give my past self?
Apart from 'Don't wear big earrings around small children'? Probably, 'Hang on in there' because it would take another ten years before I was offered a book contract.
And maybe suggest I get over my obsession with the colour black...
Related Posts:
A Room of One's Own
Where I Write
Writers Write (or, what I really do all day)
Posted by Louise Marley at 9:01 pm